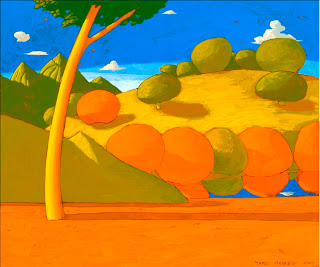 On the wake of the memory of the Sienese hills, I look at the different landscapes and environments of Manzella and I think that painting is a mental thing. Leonardo petitioned this thinking of indefinite space, of the universe concealed between one and the other aspects of the phenomenic world which the eye distinguishes and recognizes, and which the mind nominates to record it firmly in the archives of memory. Piero della Francesca sublimated it in the formal purity of the score, from which generations of artists have drawn the rule of composing contexts and terrestrial figures resembling celestial perfection, possible only like the vision of projectional imagination. Paolo Uccello and Mantegna translated into the artifice of the sweet and strange perspective, in which I seem to see a bequest in certain daring frames from above, below and in diagonal, and above all in some acrobatic and shortened postures of characters that were so dear to our young artist.  The medieval painters of gold backgrounds knew this even then, Byzantine iconography where painting was prayer, even before it was a liturgical deed or material for use in a holy service, preparing for the difficult task of reducing the unspeakable divine to a concept or a symbol, and to a visible human word.
(Nicola Micieli, Walks in Italy)
www.marcomanzella.it
Pubblicato da entroterra a 09:00